bioplastic
Intro to Wearables Final
An exploration of bioplastics and an unconventional application. Over the course of a couple of weeks, I made several pieces of bioplastic using gelatin, water, glycerin, food coloring, and activated charcoal. Using the bioplastic, I also made several copies of a small left hand using an existing mold. This was a small temporary installation using temporary materials. 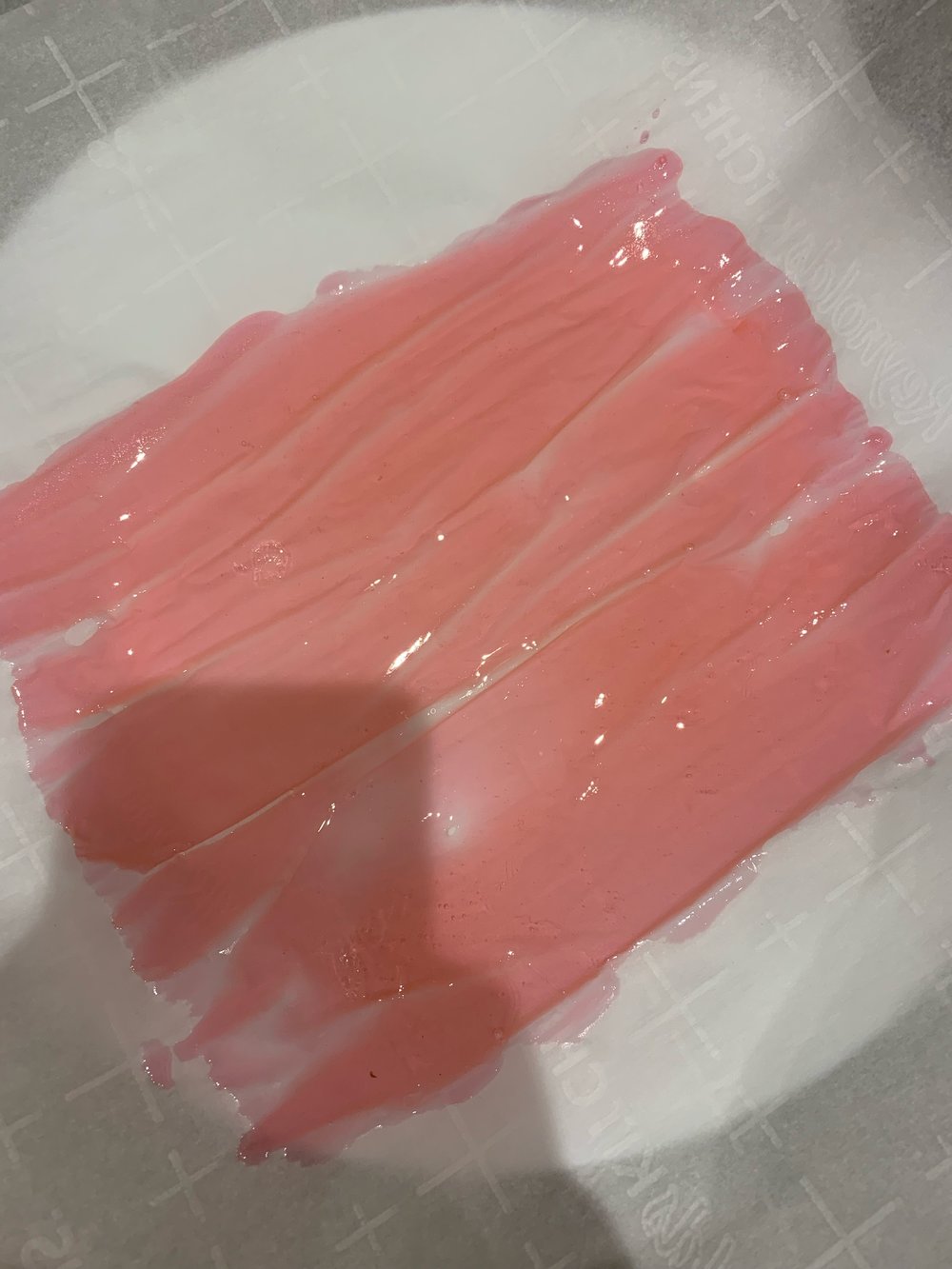 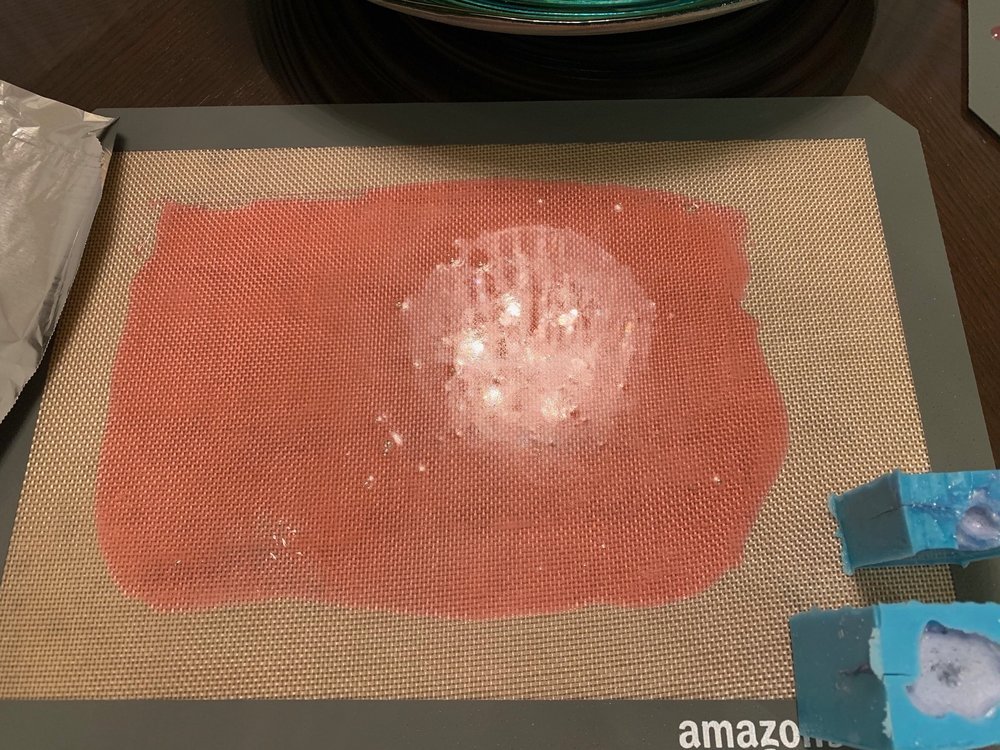 Pink bioplastic spread flat.
I wanted to try to create my own materials in order to combat the amount of waste that I produce at school. Every project has its own materials that usually are not reusable to its fullest extent. I think it's important when creating temporary, one-use projects to think about the materials that are being used and how one project can have a long-term environmental impact. Sot, I wanted to create as little waste as possible, or at least as little non-easily biodegradable waste. I also tried to limit the amount of new materials or components I bought or tried to reused other materials from previous projects. 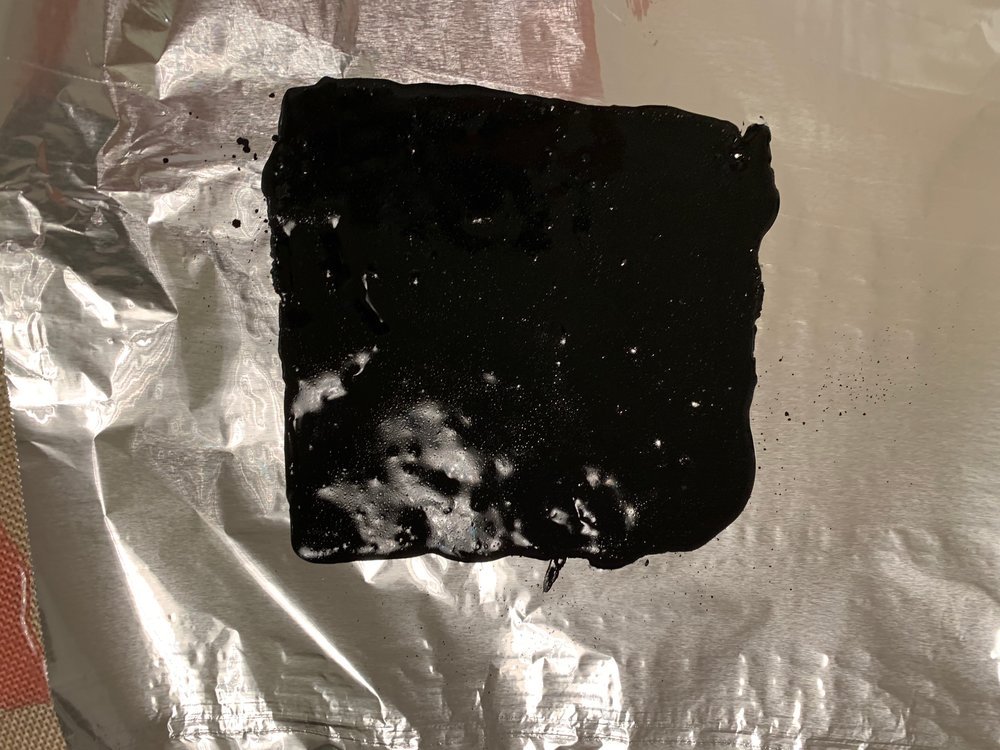 Testing many layers of the charcoal powder bioplastic's conductivity in between two conductive pieces of foam.
I made 2 different recipes, two different ways. The first one that I tried was the second method from wikihow, I tried to follow the recipes exactly, but it took me some time to find a food thermometer, so I believe I might have heated it for too long. I was surprised at how liquid the plastic would be after heating. I decided to pour a hot liquid on parchment paper, which caused the paper to crinkle and the plastic to take the shape of the crinkled paper. The second method I used the recipe on fabtextiles, but this recipe doesn’t have any measurements, so I used 4 tsp of gelatin, 1/4 cup of cold water, and 1 tsp of glycerol. I also followed this recipe while adding 3 capsules of activated charcoal powder to see if I could make some conductive materials. For the other half, I added the liquid onto a piece of gauze to make it stronger (after seeing it from this youtube video). To get this to dry faster, I put it over a vent and tried to remove the moisture as much as possible. 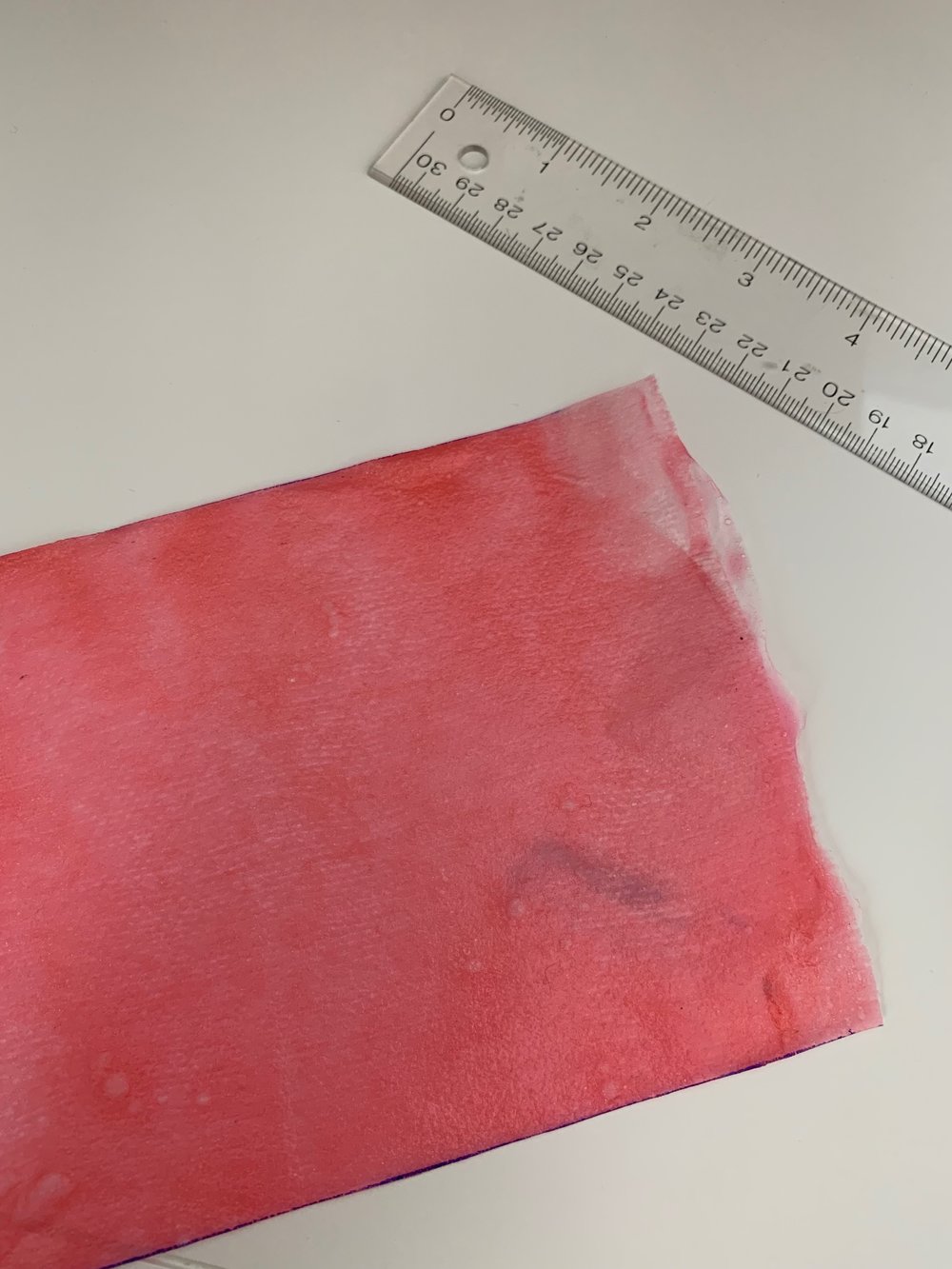 Bioplastic dried on gauze for a stronger result. 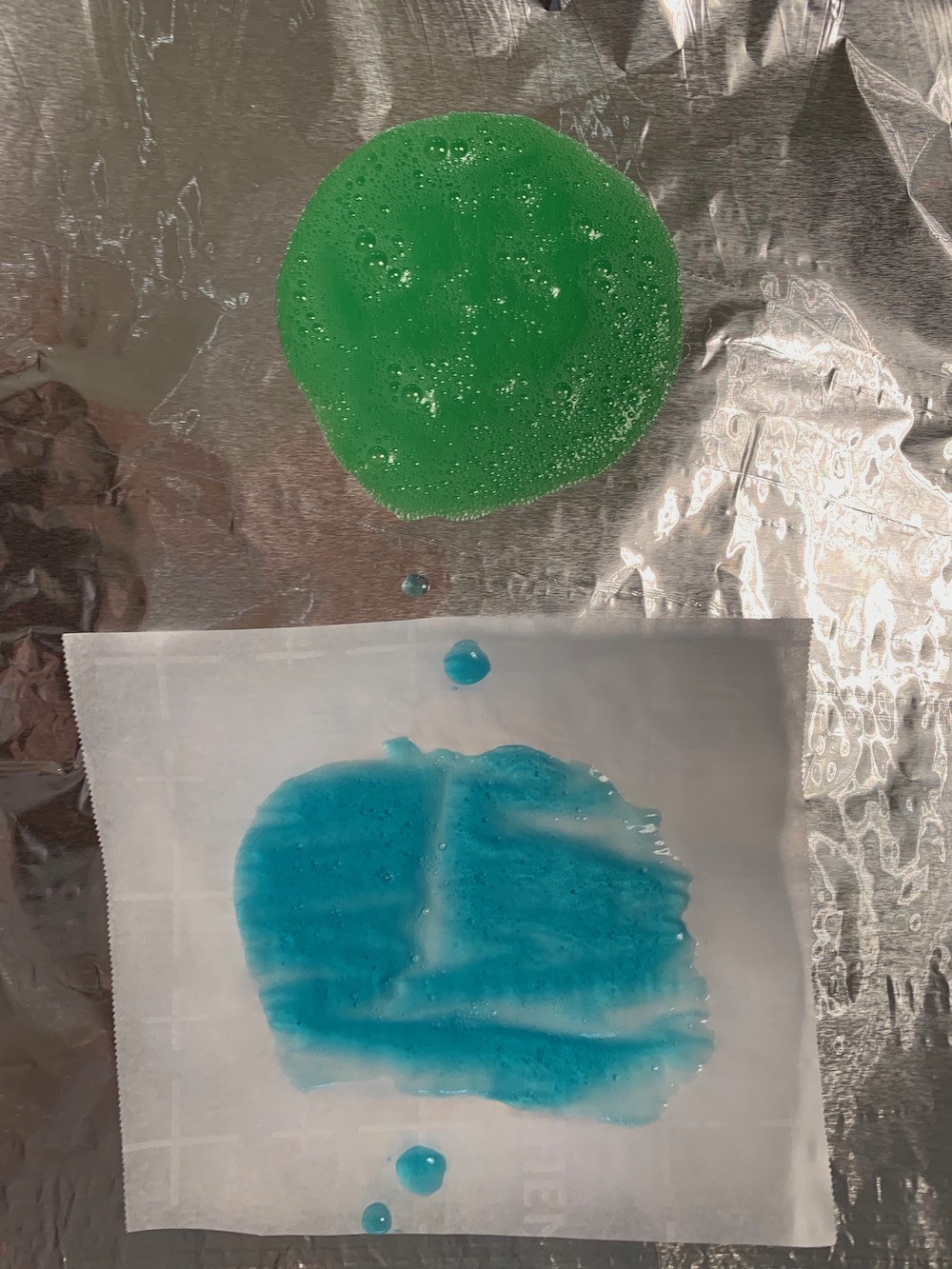 Testing different textures for bioplastic (green is foamy texture & blue is a softer "crinkled" texture).
I thought about how bioplastic could be utilized in everyday life. Maybe it can be used for children's toys, fashion labels or packaging, things that were supposed to be "temporary" or within the lifespan of a sheet of bioplastic, which is around 3 to five years, and that would have limited exposure to water, in case the bioplastic wasn't waterproofed. I tested out the possibility of using bioplastic for toys and fashion labels. I cast the bioplastic in a pre-existing mold that I had for the toy and I laser cut a mold for the fashion label. I also attempted to make a button array using the charcoal powder bioplastic as the conductive component and additional laser cut molds.. After adding a lot of charcoal powder and layering the bioplastic sheets together I was able to create a "switch" by placing the charcoal powder bioplastic in-between two pieces of conductive foam. 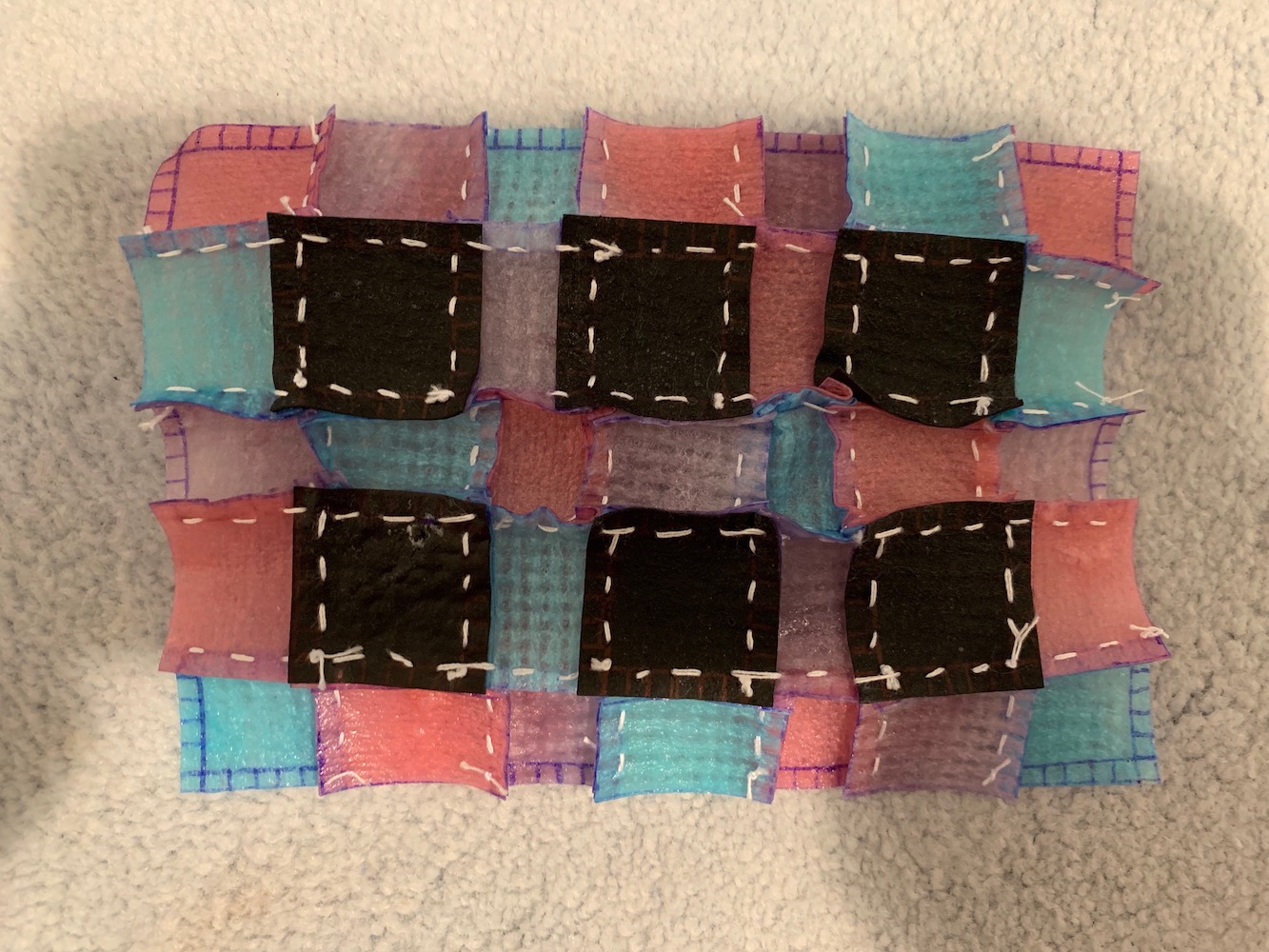 The back of the quilted bioplastic. 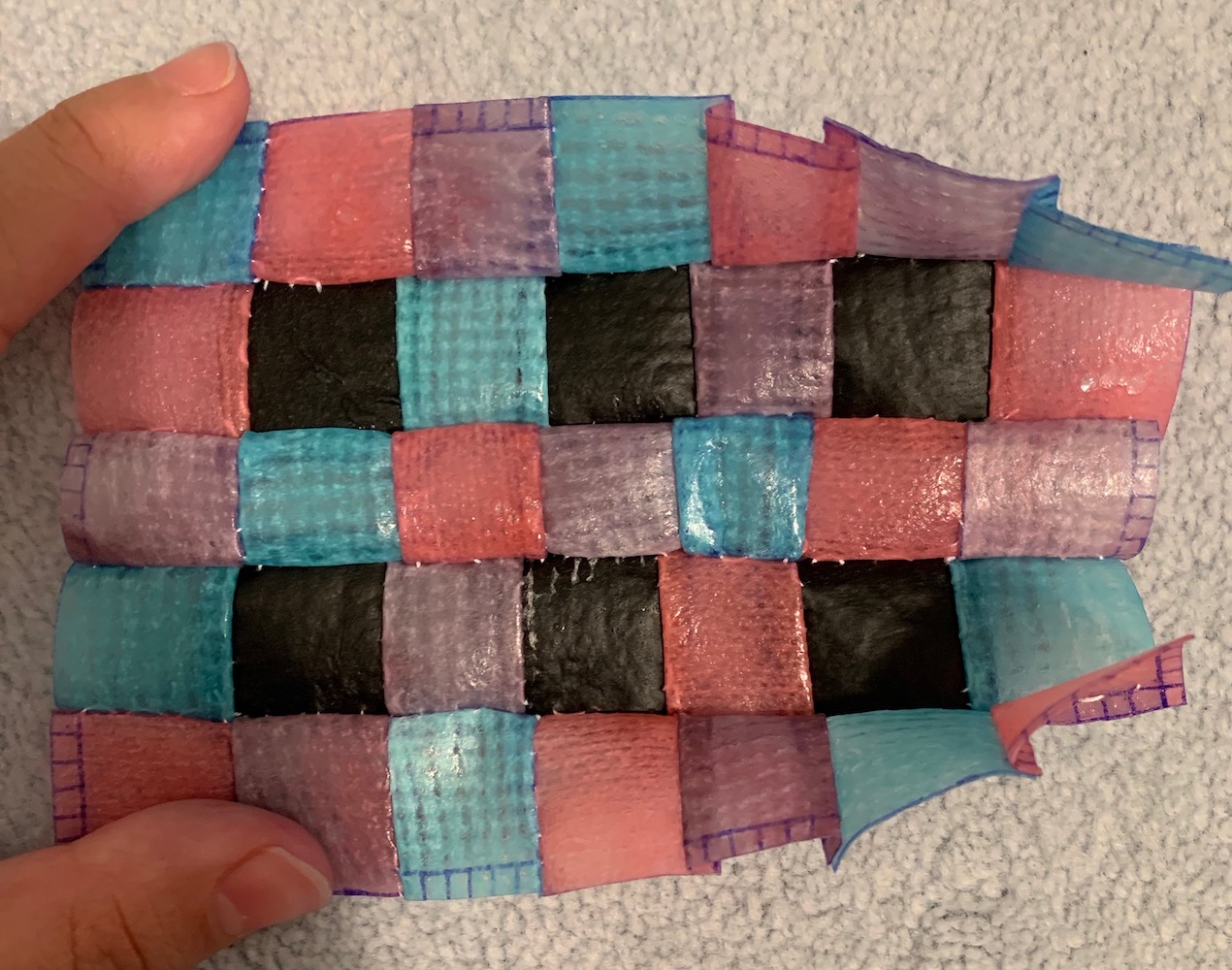 Quilted bioplastic that was dried on gauze to test the ability of sewing bioplastic.
I found the original recipe I was using (4 tsp of gelatin, 1/4 cup of cold water, 1 tsp of glycerol) was too rigid.So I tried a new combination of 2 tsp of gelatin, 2 tbsp of water, and 1 tsp of glycerol. I added more glycerol in order to make the plastic more flexible and reduced the overall amount of the recipe in order to make smaller batches. he label mold did work, but only the first time that I tried to do it and the other times got ruined (maybe using a mold release or cooking oil would help). The larger molds I cut for bigger sheets of bioplastic and the button array also failed because the heat of the bioplastic was bending the 1/8 inch acrylic. Since I was trying to make larger batches of bioplastic, by the time I started spreading the plastic in some of the molds, the plastic had already started to dry outI also made more rigid sheets of bioplastic by drying the bioplastic on gauze along with the charcoal bioplastic on top of gauze. I wanted to experiment further by making a sponge with bioplastic by adding soap foam and drying the bioplastic on top of parchment paper. I let the bioplastic dry for 3 days without touching them and then I flipped them over. By making the thickness thin, it made the bioplastic dry faster. After seeing the cast hands, I wanted to light up the hands using the button array, but planning out the button array proved to be more difficult than I thought. Building something from small sheets of plastic that I had made without thinking of what I would do with them, caused me to learn better planning skills in the future. 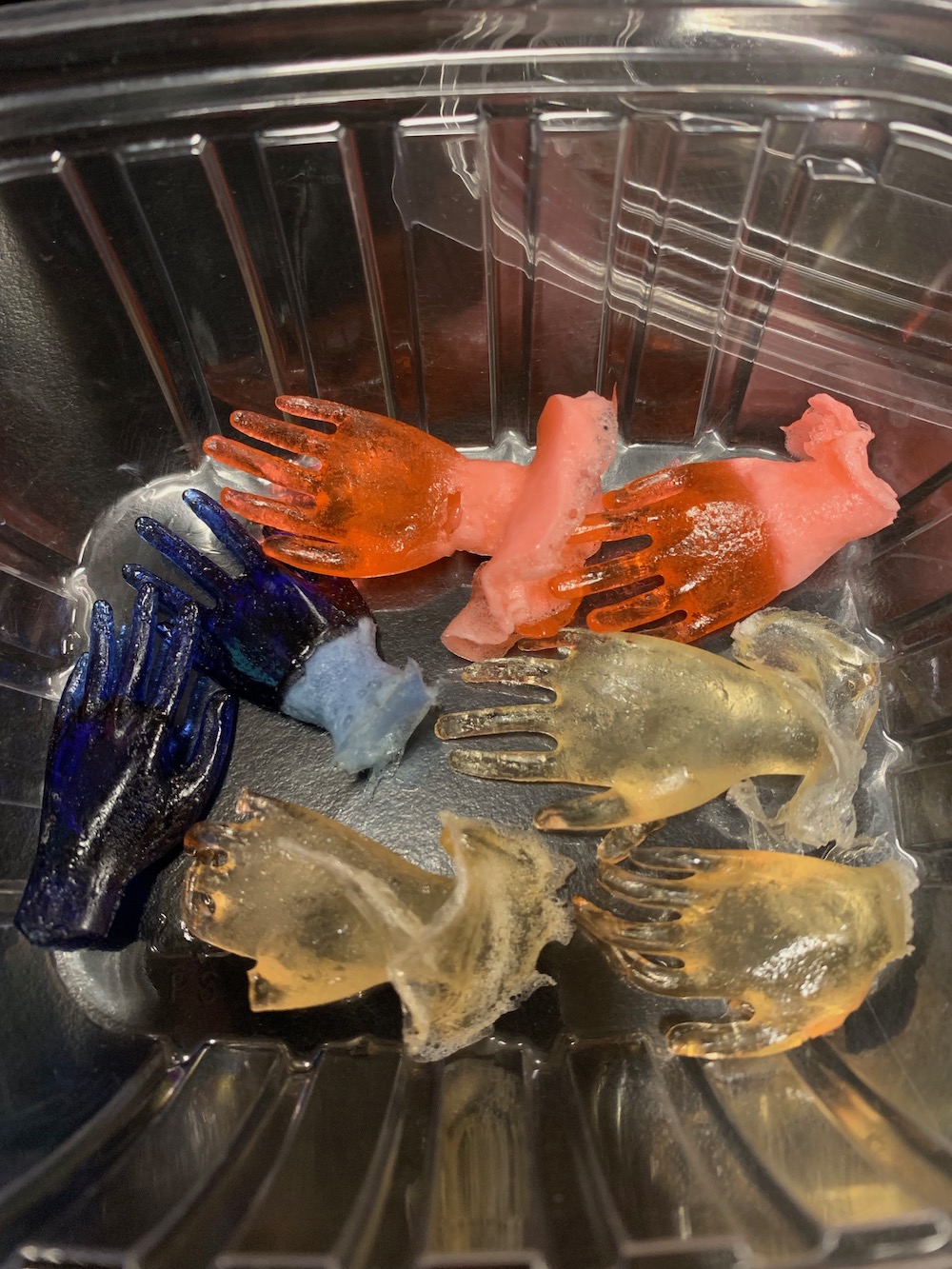 Many bioplastic casted hands partially dried out with different textures. 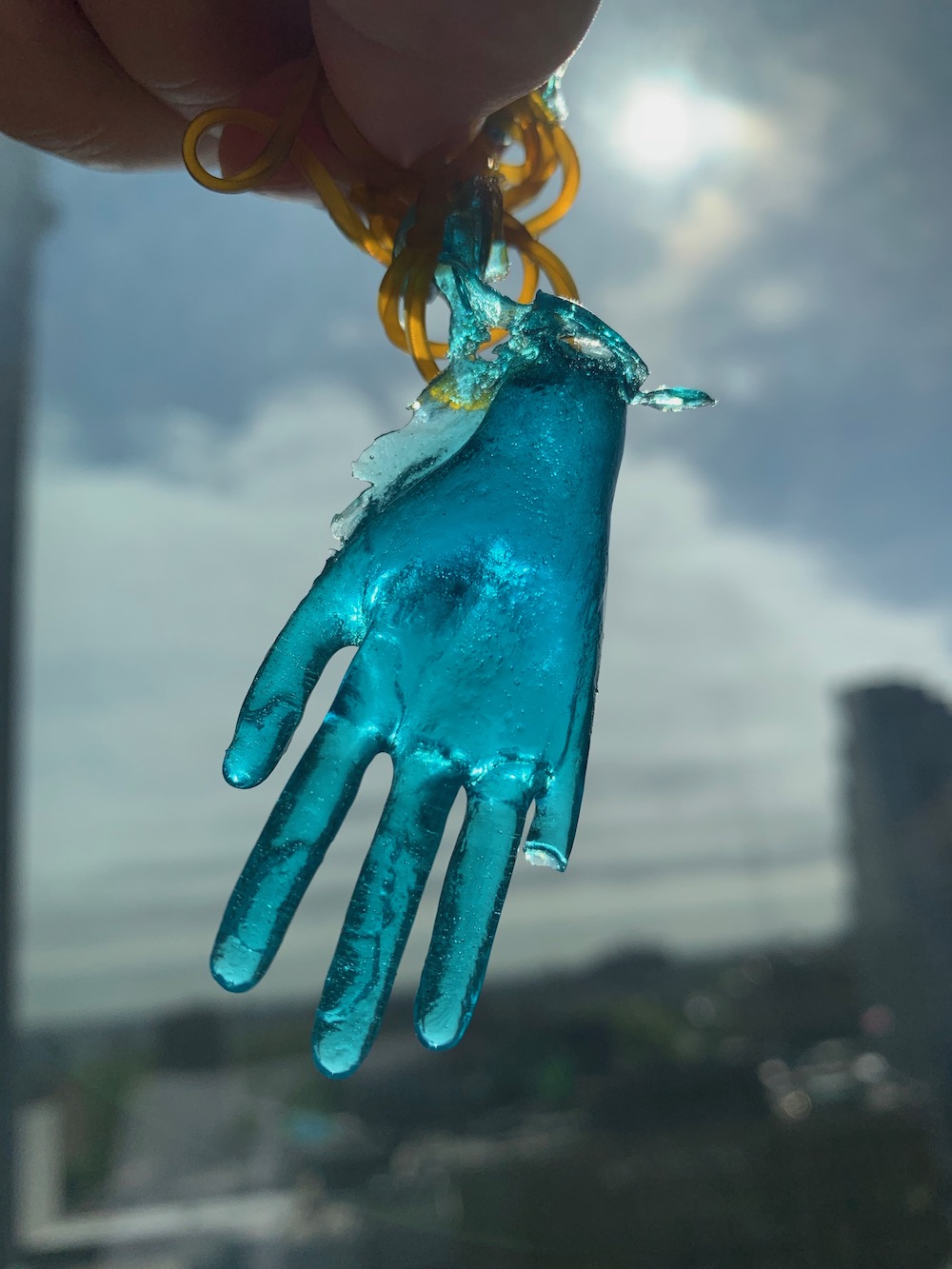 Bioplastic casted hand before fully dried.
After the sheets were dried, I started cutting 2 x 2 inch squares, but then I quickly realized that making such large swatches would not optimize the amount of material I would be using so I made 1 x 1 inch swatches. It was difficult to make evenly measured swatches because the bioplastic kept moving or slightly changing in size. I wanted to "quilt" together the swatches for the button array. After quilting the plastic together, I wanted to create FSR's that would control when an led would go on or off using the charcoal plastic. I layered small pieces of the charcoal plastic sewing them together using conductive thread. I thought the conductive thread would lower the resistivity of the charcoal (one single charcoal sheet laid flat had a resistivity in the Mohms). I sandwiched the charcoal bundle, trying to replace vleostat, between two pieces of conductive foam. I utilized foam to try to make the button interaction more satisfying. In the end creating the button array was too time consuming and material consuming, so I scraped the idea in the end. If I were to try and remake this I'd make a much thicker bioplastic structure to hold everything together. Also trying to solder conductive foam and fabric was a nightmare because I kept burning it. In the end I was able to light the bioplastic hands using sewable leds and conductive thread. I did end up showing the bioplastic hands in a mini-installation for the 2019 ITP Spring  show along with my sample sheet of the different types of bioplastic I created. Creating this project made me realize just how much material that I waste and how much waste I create in a couple of weeks. I ended up creating a lot more waste than I realized just trying to make things polished or putting things together, making a project with zero waste requires a lot more planning than I realized. This project inspired me for the future, making me think about the materials that I choose and how to maximize scraps from previous projects and has made me want to work within this space of reusable or compostable materials in the future. 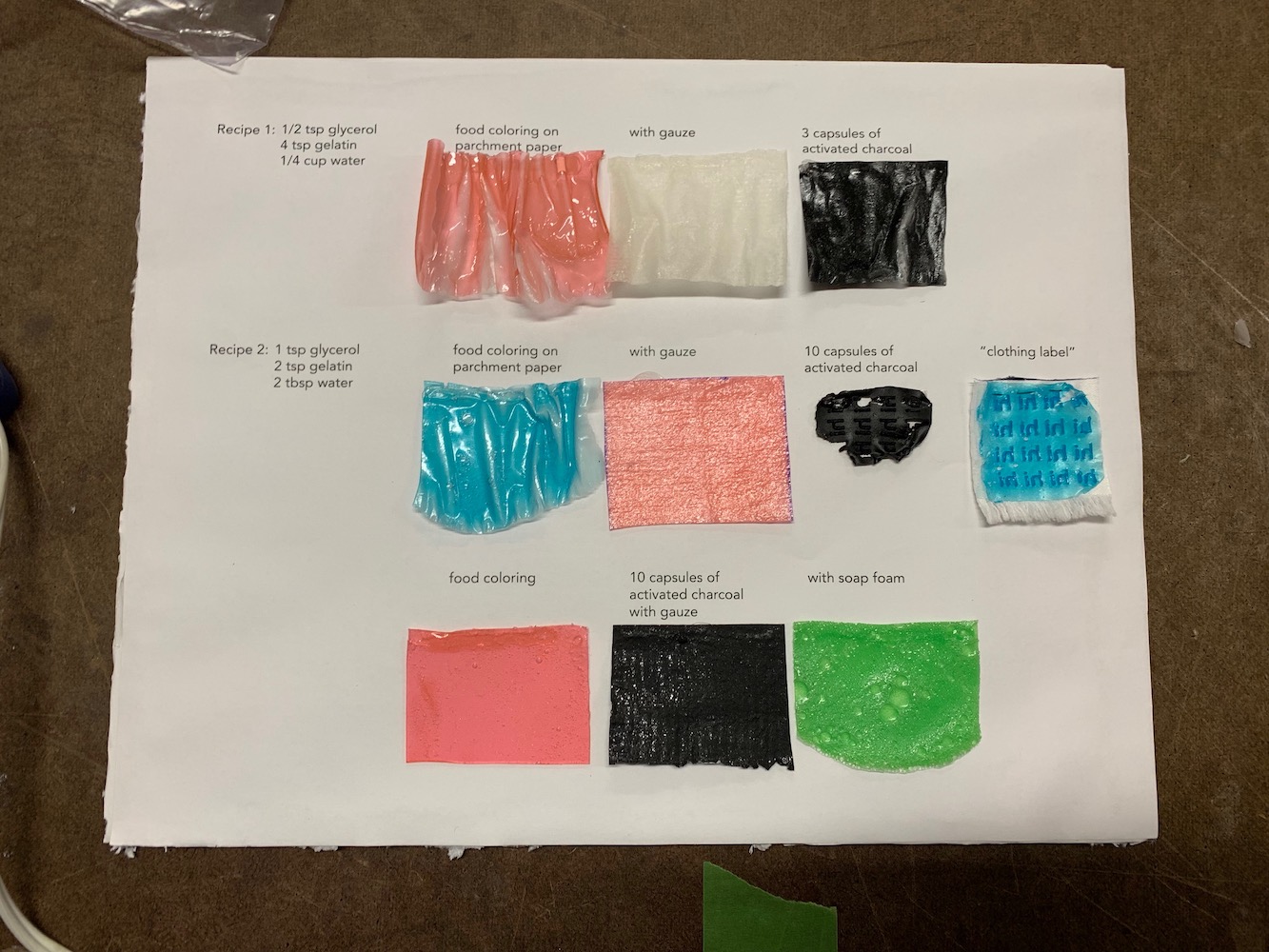 Board showing all the samples that I made along with recipes. 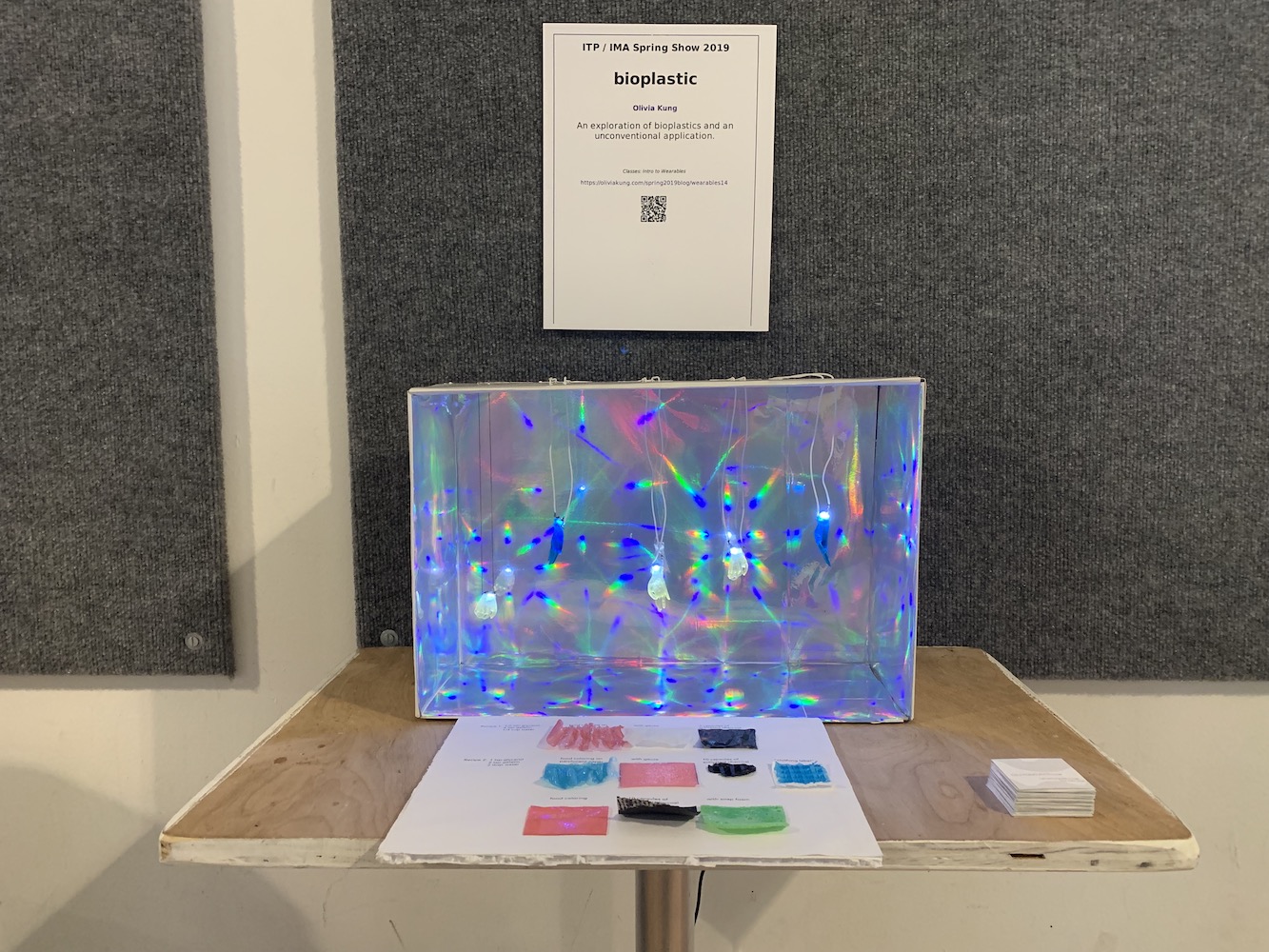 bioplastic being shown at the ITP Spring Show. 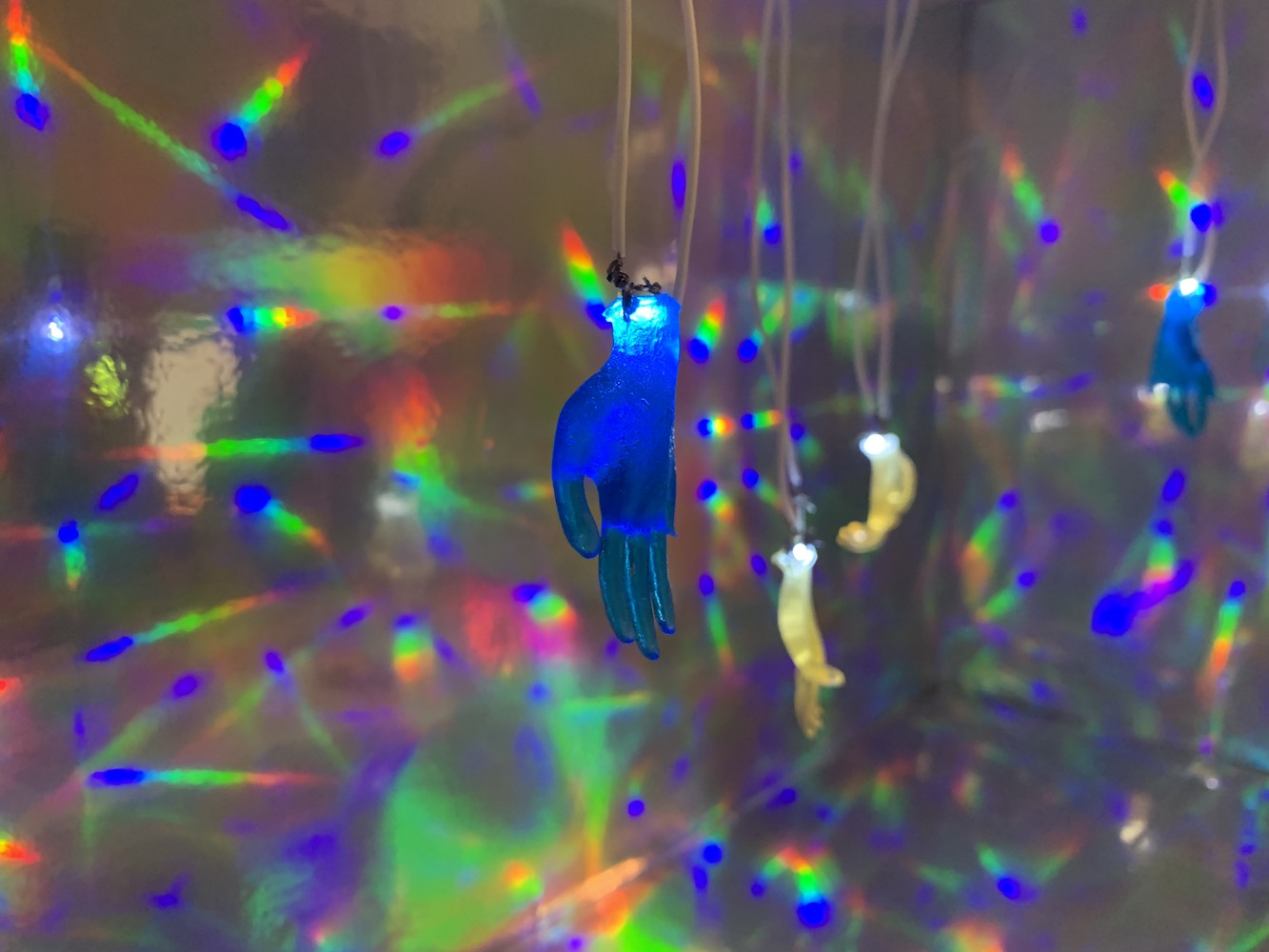 Close-up of the illuminated bioplastic hands.